Today the area has been turned into the family Unit, many immigrant workers fetched their families to come and stay with them.  Because overcrowded, there are lots of people staying there now. There are eight people staying in one unit sometimes even more. Some people build shacks outside the unit and have increase capacity of water usage and sanitation.  Beside the problem of the area being over crowded the infrastructure in that area is very old and not maintained.
There is open storm water drainage, when the sewage pipes bust it goes straight into this drainage water storm drainage and it goes into Rietspruit River and Vaal River. The people staying next open water drainage has been complaining about being exposing to the unpleasant smells. People have been complaining about stomach problem from drinking water, because the water pipe and sewer system are combined.  There are cases whereby people when they open their pumps in the houses what comes out is sewage. 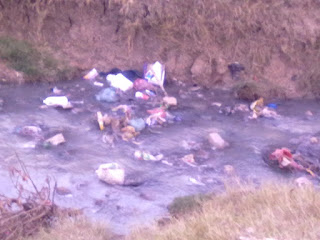 What is the Health Problem Associated with the Raw Sewage?
The health hazards of inhaling the smell of raw sewage are not likely an immediate threat but contact with contaminants and bacteria is a cause of illness. Particles of raw sewage are able to become airborne, however, and inhalation of these particles causes adverse health effects such as gastrointestinal discomfort, diarrhea, nausea and vomiting. Raw sewage poses the biggest threat to public health when it enters the water supply, where it is diluted and spread much wider than where it originated. While boiling water before consuming it minimizes the risk of waterborne illness, there is a high risk of potentially deadly diseases such as cholera and dysentery from drinking water contaminated with raw sewage.
Water and Sewage
Sewage can also kill fish, if it enters a waterway, and it can pose health risks to other animals. Sewage spills may also lead to algae blooms, as organisms feed on the sewage and reproduce in large numbers. Once sewage enters a waterway or the groundwater, getting rid of it can be a very costly endeavour.
Who is responsible?
Sewer and drinking water in Emfulweni it is the responsibility if Metsi –a-Lekoa, if there is a spillage metsi-a – lekoa has to be notified. Samson Mokoena and VEJA monitor Dudu Diphoka visited the area after and they have witness the spillages, communities says that the spillages has been taking place for three days and now they tired of calling the municipality, the response they are getting is that there is no funds and the people are also contribute to the problem.
What are the recommendations?
In the last meeting of the Rietspruit water catchment Forum, Department of the Water Affairs promised to go and investigate the problem, the municipality must also invest on installing new infrastructure. But it going to take long time before the situation can be resolve. People cannot continue living the way they living. That area is chaotic, it need to be rehabilitated as soon as possible. Samson Mokoena who went there came back very worry about the kids growing up in that area. He also said there is no need for local municipality to refuse to clean up the area; clearly the lives of the people are at risk. Monitors an youth in that area will take an action against this issue in the month of July. It will go to the community, write memo's to the responsible authorities.